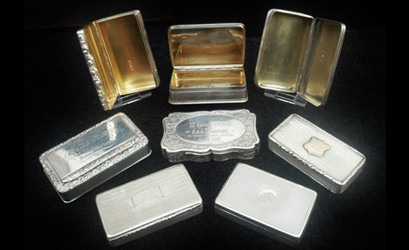 The History and Use of Silver Snuff Boxes

Of the many antique and other intriguing items that can be collected, one of the more interesting is snuff boxes. You can find different types of sterling silver snuff boxes that come from around the world, including Russian, Scottish, and English origin. You can also find such boxes from different periods in history, such as Georgian or Victorian.

Interested in why snuff boxes can be important collector’s items? It helps to know their function and origin.

What is a Snuff Box?

A snuff box obviously holds snuff. Tobacco is responsible for the most common types of snuff. The box itself is a simple container with a lid that kept the snuff fresh which helped keep its potency.

Powdered tobacco was less addictive when inhaled in its raw form into the lungs as opposed to being smoked.  However, it still addicted its users through the nicotine contained in the tobacco. They suffered from the side effects which included an increased risk of cancer to the nasal passages, sinuses, and throat. Snuff was quite popular for centuries and even today it is still used around the world.

The first people to have created snuff were the indigenous population of Brazil. For hundreds of years, they would grind up tobacco on a mortar made from rosewood.  This gave the substance a pleasant wood aroma. Snuff stayed fresh for a long time when stored in airtight bottles. In the late 15th century, when Christopher Columbus discovered the Americas and tobacco, snuff proceeded into Europe.

Interestingly, the introduction of snuff to Europe came by way of Friar Ramon Pane.  He had accompanied Columbus to the Americas and demonstrated the product upon his return. Snuff spread like wildfire across Europe after an initial mixed reception.

The 16th century saw the spread of tobacco products and snuff became sought after by royalty and the well-to-do.  By the 17th century, snuff had reached English shores. It even became acceptable for ladies to indulge in the product. Snuff became established and meant that storing it for future use became a necessity, hence, the  creation of snuff boxes.

Creation of the Snuff Box

Antique sterling silver snuff boxes created in the 17th century from all parts of Europe and England became personal possessions.  This was  much like jewellery boxes and other family heirlooms. It is little wonder that gold or silver and other valuable materials were used to make them. Of course, as with other, similar items found in the households of the rich and royalty, the snuff boxes quickly became more ornate over time.

There were two types of snuff boxes that were used given the fact that a person who indulged in snuff could be either in or away from their home when they wanted a quick sniff.

Pocket: The pocket boxes were small and usually only held enough for about a day or two of use. They were small and slim, but still fashionable even when comfortably fitting into a pocket.

Box: The larger snuff boxes were kept in the home and could hold several days’ worth of snuff. The shape of the boxes were not just simple rectangles, but there were a variety of shapes used from square to round and so forth. Snuff boxes made from porcelain often looked like trunks and there were some shaped like shells, although they were quite rare.

It was during the 17th century when snuff boxes started to become more decorated, different materials came to the forefront like silver. Still, many of the snuff boxes were hand-painted, featuring tiny portraits to bucolic scenes to miniature landscapes. For the wealthy, many had cameos of themselves painted on the boxes.  Some versions made in France were known as tabatieres, and used gold more than silver.  Encrusted with amethysts, sapphires, and even diamonds they were very ornate. You could find them enamelled, engraved, or chased.

The antique sterling silver snuff boxes created in England were mostly made in the cities of Birmingham & London. By the early part of the 19th century, a number of snuff box makers were crafting their products which became quite famous. Craftsmen such as Samuel Pemberton, Nathaniel Mills, and Edward Smith created silver snuff boxes that featured engravings of abbeys and castles on the lid and sides.

The Scottish created a unique type of box.  This was a snuff mill made from a horn which featured a lid crafted from metal. The term snuff mill probably comes from hand mills which were used to ground snuff in the first place. However, another theory held that the insides of the horn had ridges so they owner could grind or mill the snuff to a finer degree. There is no strong evidence for that theory, but it cannot be ruled out. The horn was often decorated or engraved with different scenes, shapes, or decorations that made them unique to the owner. A silver lid would sometimes decorate the top of the Scottish snuff mill.

The contributions of craftsmen to the creation of silver snuff boxes changed from the Gregorian times to the Victorian era, reflecting the changes in the culture. Plus, new technology made it easier to create snuff boxes when mass manufacturing techniques were employed. This allowed more common peoples to own snuff boxes made from sterling silver which increased their popularity, but also removed many of the individual touches that they became known for over the years.

Although snuff boxes have lost much of their popularity with the public, their value as antique items have never been stronger. This is why so many sterling silver snuff boxes created before the age of mass manufacturing are considered quite valuable.