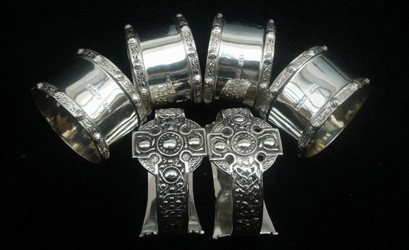 The History and Use of Silver Napkin Rings

Silver Napkin Rings are used on a daily basis. However, their origins remain unknown to most people. This is because we have grown up with these items and take them for granted. In terms of tableware, many of the items have been in use for centuries.  They have evolved over that time to take their current shapes and uses. Napkins have been a part of table settings for many years as well.  However, napkin rings have a more interesting and unique history which goes back for two centuries. Sometimes called a “serviette ring”, napkin rings have a relatively long and interesting history in terms of our daily lives.  Napkin rings have commonly been made from silver.  People often say “silver napkin rings” to describe this device which actually does more than hold the napkin in place.

What is the Purpose of Silver Napkins Rings?  The actual purpose of these rings is to identify the napkin used by a particular person. Rather than embroider the napkin, a simple ring not only holds them in place, but also identifies the user. This was done not only for dinnertime, but also when the napkins were washed as well.

The rings themselves, with the initial or name of the owner, were often christening gifts.  They were also given at weddings to the happy couple. In fact, silver napkin rings are quite popular as gifts to this day.  However, the overall meaning of their function has been obscured somewhat by time.

The History of Silver Napkin Rings.

The exact origins of napkin rings are somewhat obscure. However, the current form of the ring began in France back in the 19th century. This is a time when sterling silver was all the rage as it could be fashioned into many different shapes. At the more fashionable dining tables in France,sterling silver napkin rings were quite common.

Napkin rings soon made their way across Europe and to America where they were often fashioned using more common silver plate. The designs in the US reflected somewhat different style in terms of the ornamentation of the rings, although the Reed & Barton along with Gorham were silver manufacturers that prided themselves on creating unique figural-type rings.

In fact, many of the rings depicted animals such as dogs, cats and horses. By the turn of the 20th century, Tiffany & Co. along with Liberty in the UK were creating different types of napkin rings that include the Art Nouveau movement as well as simpler types to reach larger audiences.

Today, many of the antique napkin rings have become collector’s items and are highly valued in many homes.

The most popular type of material used in the creation of napkin rings is silver.  Particularly those of the 19th and most of the 20th century. The use of other materials have made rings distinct and unique.

Napkin rings have been made from porcelain, glass and pearl embroidery which have all been used to add a unique touch to the table. In addition, bone and wood provide a more natural feel to the rings.  They can also be crafted into the classic figural shapes as well.

Bakelite became a popular substance in the creation of napkin rings by the mid-20th century.   It could accept different shapes and was sturdy. However, silver is still generally accepted as the type of metal best suited for the dinner table.  This is especially true in terms of family heritage, gifts and special occasions where silver is the metal of choice.

There are certainly many different types of napkin rings that feature a host of designs from the simple to the very elaborate. Depending on the country, there are different traditions which have their own unique designs placed in the rings. In many English speaking countries for example, napkin rings often come in numbered sets of 4 through 12 which have their own distinctive design.

Standard: This is arguably the most common type of napkin ring and is usually made from skewers. It is noted for its simple, clean appearance and certainly adds to the dinner experience.

Figural: This is a type of napkin ring very popular in America and is noted for being a part of a small figurine or sculpture that may depict all sorts of popular shapes or appearances. Figural napkin rings can be made from wood, silver or other materials.

The Future of Silver Napkin Rings

The popularity of antique silver napkin rings and clips, has led to a resurgence of interest in these products. Napkin or serviette rings are still highly popular as wedding or christening gifts. It seems as though that trend will continue strongly into the foreseeable future.

The interest in older rings, particularly those made of sterling silver has helped to awaken those interested in collecting and even selling these antique serviette rings. However, it also has shown a renewed interest in people who want to have this particular type of tableware holding the napkins in their home.

There is no doubt that silver napkin rings have come a long way and thanks to their place in our lives, will continue to be with us for many years to come.