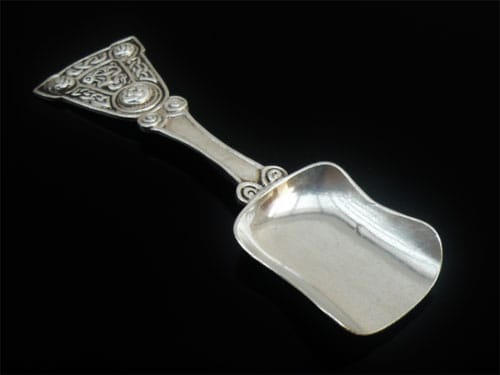 Tea is certainly one of the most popular drinks in the world.  Millions of people enjoy it on a daily basis. However, it is more than just the cup of tea itself. The ritual in creating the proper mix of dried tea leaves to make the right flavour. As part of this tradition, the caddy spoon emerged.  From a simple tool to a very ornate spoon that was quite the fashion in the 19th century. An antique silver caddy spoon can fetch quite a price on the market, although today the spoon does not quite hold the standing it once did.

A caddy spoon is a rather simple item that is used for measuring out the dried tea leaves in order to make a proper cup of tea. Such spoons are made from many different materials, but the most common is silver or sterling silver. The caddy spoon is a tradition of English, Irish and Scottish culture with a deep history that goes back centuries.

The caddy spoon itself features a short handle and a wide, shallow curve to help take and measure out the proper amount of dry tea leaves. The rather shallow spoon does make for easy measuring and the short handle allows for good control. For such a practical spoon, it certainly became one of the more ornate pieces of flatware from the 18th century.

The History of the Silver Caddy Spoon

The original caddy spoons were not crafted, but rather they came from natural sources. The shell of a scallop made for the perfect caddy spoon and many were used in that capacity since tea was first brewed.

The actual origins of the caddy spoon itself are shrouded in mystery.  This is especially in terms of its broad, flat shape and very short handle. There are many stories that abound about the spoons.  One is that they were inspired by the natural shape of shells left in the tea-chests sent from China.

However, it is probably more logical that the short handle came from the fact that the caddy spoon was locked in the tea caddy or box itself, meaning that a long handle was impractical. This way, the spoons would be kept secure, which may be one reason why so many antique silver and sterling silver caddy spoons are still around.

In fact, the vast majority of the silver caddy spoons were manufactured during this time. There are a number of reasons why, but the demand of the upper class and their sheer popularity in the UK certainly contributed greatly to this movement. English, Irish and Scottish upper class and royalty certainly ordered their fair share of the caddy spoons, but in reality many of the ones made in the late 18th century were fairly cheap. It was only when tea began sweeping the world did the caddy spoons become more ornate.

The very shape and ornate style of the silver caddy spoons veered on being works of art as much as they were practical tools to measure out dried tea. The sheer imagination used in the creation of different designs generally ranged from mostly natural objects such as feathers, leaves, and shells to more imaginative creations such as shovels, the caps of jockeys and even hands.

The handles were also quite ornate as well with some made of wood or ivory. Many silver tea caddy spoons were also matched to the flatware of the home, often being sold in complete sets. It was also not unusual to find engravings on the handles also. This helped make the silver caddy spoons even more unique and expensive as well.

However, by the turn of the 20th century the silver caddy spoons began to fall out of favour. The rise of the middle class, modernization and the trends toward simpler fashions began to cut severely into the use of silver for caddy spoons. By the beginning of World War II, most of the manufactures had gone out of business.  Although they are still being made today, the heyday of the silver caddy spoons has certainly passed.  As far as the antique market is concerned, finding one from the 19th or 18th century may fetch a very high price depending on its craftsmanship.

For those in the antique market, finding valuable silver or sterling silver caddy spoons requires a little research and attention to detail. This is because the market is such that many fakes have been created.

The spoons you should look for are properly hallmarked and dated so that there is an accurate history. The ones with unusual shapes and styles are the most sought after.  These are the ones that will fetch a considerable price on the market. They are usually undamaged and will only show the passage of time. Many fakes, however, are often cast from a single original caddy spoon, so telling them apart will take proper documentation.

The London silversmiths are generally the focus of most antique silver spoon purchases for a good reason. They created high quality items that have withstood the test of time. Silver caddy spoons made from the Bateman family in the 18th and early 19th century are particularly valuable.  They can garner a high price on the antique market.

If you are looking for antique, hallmarked sterling silver caddy spoons, then expect to pay from $500 to $1000 or more for the rare items. However, there are many fine examples from the latter half of the 19th century that go for much less.  Many of these are still quite attractive. Today, silver caddy spoons are certainly quite fetching and make the perfect entry for many into the antique market.