The History and Use of Silver Toast Racks

Silver Toast Racks have become commonplace in homes around the world. They are primarily used to keep the toast crisp. Otherwise the moisture that is released from the toast will condense and make it soggy. Most toast racks today consist of several vertical partitions.  These usually range from five to eight, and are set on a base.

The gaps between the partitions is where the toast is set so that it remains ready on the table. The base is where the crumbs that fall off can collect which means they can be easily disposed. A large ring is present on many toast racks which allow them to be easily passed around the table. Earlier toast racks are made from materials like sterling silver and are sometimes highly decorated.

From English to Scottish racks, they come in several designs.  These include Art Deco and range through different eras from Gregorian and Victorian to the Modern era. In addition to their primary use, toast racks can be used to hold letters, plates, and many other things.

Although sliced bread was a 20th century invention, the consumption of toast dates back to the Roman times. In fact, the term “toast” is a derivative of the Latin word “Tostum” meaning “scorched”. However, it would be nearly 1,800 years before the toast rack was invented.

Until that time, most of the innovations that dealt with toast was in how it was made. Such as the wire frame which was made from metal and held over the fire with the bread on top. One of the more interesting inventions was the toasting fork.  This was a common sight in the Victorian era, and allowed one to hold the bread directly over the fire. It was not until 1893 that the toaster itself was invented by the British Crompton Company.

The first toast rack was invented around the 1770’s, although the exact date or manufacturer was not known. Most likely, it was an inventor who came up with the idea.  Whatever the case, it was quickly copied and never patented which is why the actual origin is lost to history. A decade earlier the ability to fuse metal plates paved the way for the invention of the toast rack.
This is because a thin strip of sterling silver could be shaped around a piece of copper.  The copper was circular and around 5 mm in diameter. Once the wires were fused, they were pulled through a series of holes to reduce their diameter.

This new technique led to the creation of the toast rack along with a myriad of other items. Sterling silver was the choice for the metal because it was available and could be manipulated easier when hot. It also held its shape and was quite strong when it cooled, making it the perfect metal for creating toast racks. Whether the rack was created out of convenience in holding the toast or it was realized that the toast could remain dry and crispy is not known.

One reason that the 1770s are believed to be the time when toast racks were made is because of a newspaper report in 1779 about a burglary which including the stealing of a silver toast rack which was valued at two pounds, a princely sum in those days. Needless to say, the two burglars were caught and tried for their crime which was considered quite serious.

Anyway, around this time toast racks began appearing in homes of the well-to-do, but also the middle classes which wanted more luxuries around their breakfast table. The fact that they were often made of sterling silver is an indication of the value which was put into the product.

By the turn of the 19th century, cookbooks were now citing the value of dry toast and how the rack worked to achieve this effect. Interestingly enough, it was considered quite an accomplishment to keep the toast dry and prevent it from becoming soggy, a feat that required considerable attention it seemed. Still, it all came back to the toast rack as being the perfect solution and why it should be in the home.

One of the more interesting advancements came in 1807 when Roberts Cadman & Co. creating a folding toast rack, one that was perfect for storage and solved a substantial issue for homes that had a premium on space. By the late 19th century, novelty toast racks became all the rage as they featured interesting shapes from crossed riding whips to wishbones to hearts and more.

In 1956, the Campden Toast Rack was introduced and was an immediate hit. It’s simple design from stainless steel materials helped make such racks even more popular in the home of everyday people. Today, toast racks have become quite modern, including those that feature butter pots, egg cups, and other holders for condiments. The sterling silver has been replaced by other, cheaper materials, although the rack itself is still considered a fashionable part of the home.

Sterling silver toast racks that are British, Scottish, or American in design fetch a good price on the antiquity markets. As with many items made for the home, the relatively simple design of the toast rack became more elaborated with designs and engravings that personalized them for the customers. It was quite common in the early 19th century to see toast racks with some form of ornamentation from the Gregorian design to the elaborate Victorian era as technology advanced in terms of designing and engraving.

For collectors, finding toast racks crafted from sterling silver from the 18th and 19th century represents a real find in terms of the craftsmanship that went into each product. Their inherent value is considerable in terms of the materials used, the history they represent, and the beautiful design for a relatively simple object. 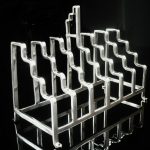