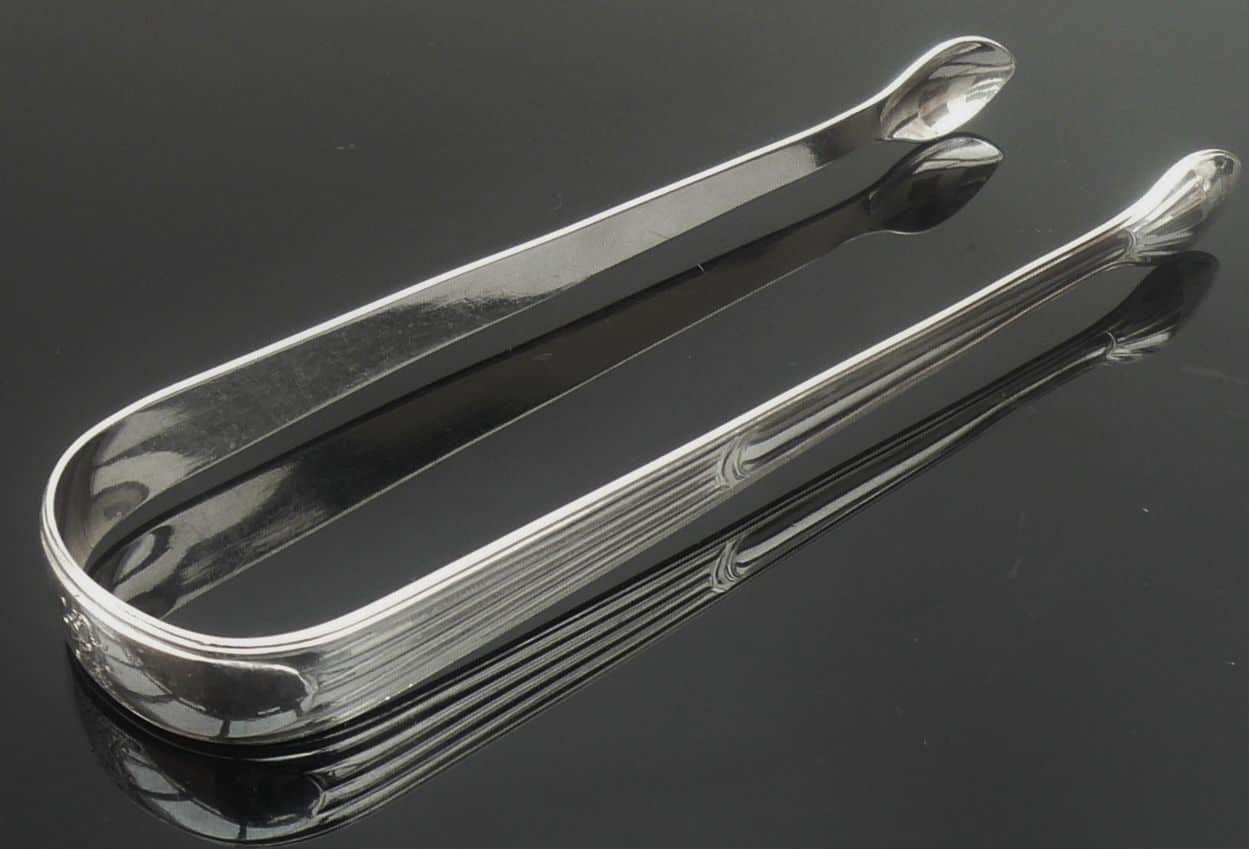 History and Use of Silver Sugar Tongs

Sterling silver sugar tongs have been in use for hundreds of years, being a sign of the prosperous and well-to-do in English, Scottish, and even Irish and Irish American cultures. The use today of tea tong antiques harks back to the days of the 18th century.  They first emerged on the scene in England and progressed through western culture.

Tea tongs or sugar nips made their first appearance in England around the time of American Revolution. The wars against the continental army of the emerging United States consumed much of England’s military effort. England itself was going through a time of considerable change and burgeoning prosperity thanks to the growing tea market.  In addition its colonies had spread around the world.

During the mid-1700s, the growth of the tea market saw a considerable rise in the purchase of sugar.  Sugar was commonly used to flavor the tea. The basic design of tongs had been in use for many centuries.  However, adapting them to picking up cubes of sugar was not done until around this time. Silver sugar tongs were developed as a practical and elegant means of picking up sugar without having to use fingers.

The tongs came in two basic designs, put together from pieces or cast as one piece. The tongs that were cast as three separate pieces, two arms and the bow which connected them, are relatively rare these days. The bow was often soldered to the arms and the mark of the maker was stamped near the joins. However, it is the single cast tongs that are far more common and the most recognizable today.

The single piece cast tongs were often highly decorated and would include the mark of the maker in an elegant logo. However, the cast tongs only lasted a short time, from about 1765 to 1780. After that, the standard silver sugar tongs came into existence.

From about 1780, the era of the standard sugar tongs began. In sharp contrast to their cast counterparts, the standard versions were relatively simple and straightforward in design. Some might include a beaded or threaded edge, but otherwise were solid. However, this did not last long as the sides of the tong were quickly used for engraving purposes and by the turn of the 19th century, it was quite common to see elaborate engravings on the tongs.

England produced many of the silver sugar tongs with most being manufactured in the London area. Newcastle became the home of some of the most well-known of all sugar tong makers. The Langlands, Thomas Watson, and the Robertsons were three names most associated with the creation of the tongs, although there were many others from different parts of England. They included York, Sheffield, Exeter, and Birmingham.

In addition, Edinburgh and Dublin were also known for their sugar tong production. The Irish in particular made excellent sugar nips that were widely respected and sought after. Still, London was the center of the industry and many silverware companies such as Chawner began to incorporate sugar tongs as part of their dining accessories. Other companies also made a name for themselves in the creation of sugar tongs, including the following

It is the Batemans who managed to dominate this period in silver sugar tongs. Not only did they establish a strong reputation during the time, but their tongs are still highly sought after today. They were probably the most prolific of all sugar nip makers in London with many collections displaying their works. Not only were they prolific, but they also created unique, distinctive designs that are the pride of many collectors.

In all there were at least 130 different makers of silver sugar tongs in the London area alone. Because the tongs carried with them the mark and design of their manufacturers, it is easy to know just how many of them existed through their works.

As with any movement that attracts lots of followers, by 1805 there was a backlash of sorts when the Old English style of tongs came back into favor. The bright cut engravings that were so popular started to fade away. By 1820, standard patterns for silver tongs came about, such as the Fiddle or King’s pattern. However, this was more of a sign that mechanization was starting to take over the manufacturing of the tongs.

The mechanization meant that silver sugar tongs began to look more alike mostly because it was a far more efficient means of production. Each company could create a unique design and that was their signature which was repeated in every tong they produced. The mechanization began to eliminate the smaller companies who still hand-made their products simply because the could not keep up.

One newer trend that began was the monogram, the printing of a single letter on the back of the tong that usually identified the first letter in the last name of the owner. The monogram stamp was easy enough for silver tong companies to produce and added a bit of personalization without slowing down the production process to any great degree.

Today, silver sugar tongs are less a part of the family home mostly because sugar is now served in packets as opposed to cubes, although you can still find them in that form. The days of elegance with sugar tongs may be passed, but they are still around in strong numbers and serve as a reminder of days gone by.

You can find sterling silver sugar nips or sugar tongs with many different decorations and designs reflecting their heritage. From the tables of Scottish, English, Irish, and Irish American peoples, the tea tong antiques are today highly valued and remind everyone of a time long past when those of the continental persuasion used them for their daily tea.