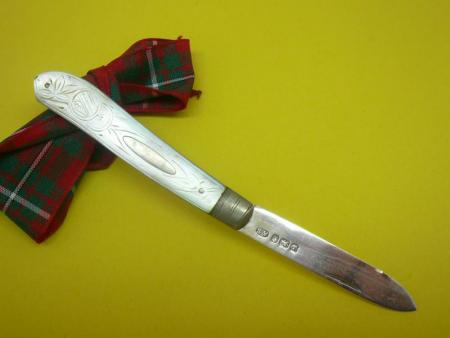 Folding silver fruit knife with decorative mother of pearl handle, hallmarked from Sheffield in 1897 with the makers mark being that of Arthur Worral Staniforth.

Very small nibble to the tip of both sides of handle(very minor) a minor dink to blade and there is some spring back of blade when in the closed position.
Measures 123mm when opened and 71mm when closed.

The maker’s mark is that of Arthur Worral Staniforth.

There is a very small nibble to the tip of both sides of handle (very minor), a minor dink to blade and there is also a little springback of the blade when in the closed position.

This item measures 123 mm when opened and 71 mm when closed.

Folding fruit knives first appeared in Europe during the 17th century. They had blades of silver or gold which were resistant to the corrosion of acidic fruit juice and men often gave them as presents to their wives or girlfriends. During the 18th century, as folding fruit knives became popular in England, they spread to the British Colonies and into America becoming a popular type of knife as a result of their versatility. In recent years, the sterling silver and mother of pearl folding fruit knives have become collectors’ items, particularly those crafted in France during the late 18th century together with early ones made in England. 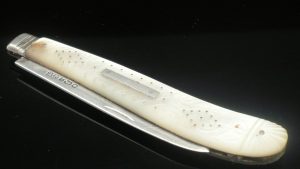 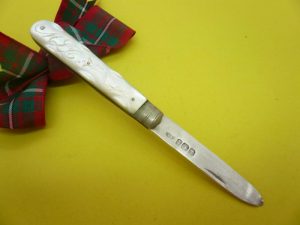